It is only SEVEN short days until Liverpool FC takes the safety off and starts off the new season under King Kenny Dalglish.

In honor of the last seven days before our first game against Sunderland, we will pay tribute to our current number seven: Luis Alberto Suarez

Mighty Reds fans only had about a half season with “El Pistolero.” Now we get to see what he can do during a full season, and some summer transfers that were brought in can only help extrapolate his immense footballing talents. 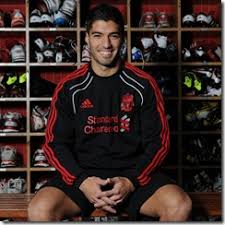 Here’s to hoping that the greatest number seven ever to wear a Reds kit can deploy Luis en route to player of the year honors!

Want to party with other like minded football fans to kick off the start of the English Premier League season? Well then you are in luck! In SIX short days Anfieldshop.com is hosting an EPL kickoff party at THE home of soccer in the South Sound Doyle’s Public House We’ll have a raffle with autographed memorabilia, drink specials and be showing the 2005 UEFA champions league final on a giant outdoor screen!

Come on out and mingle with fans of all teams, and of all leagues, and support children’s charities at the same time.

Here is the press release for the event.

The event will take place on August 12th with seating taking place at 7:00. First raffle round takes place at approximately 7:40 and the main event: The greatest football match ever played, Liverpool FC vs AC Milan in the 2005 UEFA Champions League Final. The entire match will be shown, including extra time and heart wrenching penalty kicks. Second round of raffle will take place immediately after the match ends. Beverage specials will be available. Tickets are $10 and include drink tickets. Raffle tickets are $1 per

Event coordinator and Anfieldshop.com blogger Christopher Urquhart: “Our goal is to get LFC fans and all football fans across the Pacific Northwest to come together, relax, mingle, and get excited about the upcoming season.  We’ve got a great opportunity to do this at Doyle’s as well as raise money for charity at the same time.  The PacNW is known across the country as one of the best soccer scenes and it’s great to have an excuse to throw a party for all soccer fans

This isn’t your normal bar event cash grab. The event will benefit Liverpool FC’s own current first team legend Jamie Carragher’s 23 foundation. 50% of the proceeds will be donated

“Being part of a team and achieving something together is much more satisfying and I know without the help of my team and teams with which I grew up with I would not have become the individual I am today. I want to help as many children as possible to have a better life. If they are suffering from illness we will try to help or, if they need help in sport, we will also try to aid them. The 23 foundation promotes the idea of “we” and “us” because together as a community and with help from people like you reading this, we can accomplish anything.” Says Jamie Carragher himself.

Fans and supporters of all teams are welcome to enjoy good friends, good spirits, and maybe even win some awesome Sounders FC tickets, or autographed soccer memorabilia.

With the 2011 English Premier League first kick happening on August 13th, come on down to Doyle’s and meet up with your fellow fans”

Next year let’s have the 2nd annual EPL kickoff party. Spread the word about this event and we can make that happen!!