Saturday is a big match for both Arsenal and Liverpool. Perennial premier league powers vying for a much coveted Champions league spot, but each are headed in different directions.

Where there is smoke there is fire. All is not well at the Emirates, top players either leaving or on their way out, promising new players getting red carded and missing multiple fixtures. Wenger is either not opening up the checkbook, or is not opening it wide enough for transfer targets to be swayed in Arsenals direction.

And you know what? To hell with them, would they feel sorry for us if the shoe was on the other foot? Absolutely not. So let the mighty Reds twist the knife a little in the backs of Gunner supporters and let them only have 1 point two weeks into the season. The hot seat for Mr. Wenger just got a little bit warmer if Liverpool can kick them when they’re down.

As all Liverpool fans and supporters know, as well as most football fans realize that we are constantly fighting for justice for the 96 fallen Reds. As I am not a UK resident, I cannot fill out this petition for the release of documents of the events at Hillsborough on that disastrous day. If you ARE a UK resident, please take the time to fill out this e-petition so that justice may one day be rightly served. http://epetitions.direct.gov.uk/petitions/2199Full 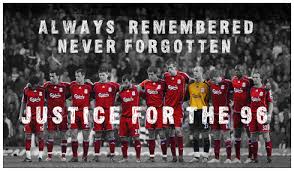